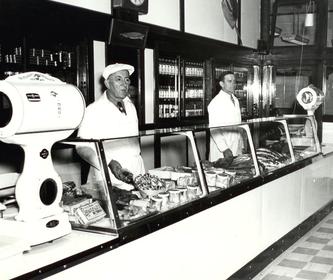 After years working for other fish companies, in 1926 Albert E. Burhop

(“Pops”) set up his own wholesale seafood distribution business at

Burhop’s went into the retail business more or less by accident.

According to Albert’s son Vern, interviewed in 1985, “The area around

the State Street store was once a lot more residential.  People saw the

they walked in, slapped down a couple of quarters and took some home.

The demand grew, so we finally installed some counters and made it

part of our business.”
When Pops opened up in the 1920s, refrigeration was basically ice in a

truck, and perishable seafood was not an easy commodity to move around

the country.  Then Clarence Birdseye of vegetable fame developed
the plate freezer, and Pops, who knew Mr. Birdseye, started using this technology to bring hard to transport items,
such as shrimp and lobster, into Chicago.  In the 30’s, shrimp of any size sold for 9 to 10.5 cents per pound,
lobster at 25-30 cents per pound.
Vern, who died in 1995, started working for his dad when he was 14, in 1929, at the start of the depression.
In order to keep the company afloat, everyone gave up one paycheck a month until the economy improved.  After
working seven days a week for many years, around 1938 Pops decided it was time to hand the business over to
Vern, so without any warning, he did and left that day.  Fresh out of the University of Illinois, Vern was literally dropped into the deep end, trying to pretend to business associates that his dad was still coming into the office.  Pops did
return to the helm during WWII, so that Vern could serve in the US Navy in the Pacific.
Jeff Burhop and his younger brother Jim started working for their dad on school vacations, joining the firm full
time when they were done with college and grad school.  State Street, once a destination for such local luminaries as Gene Siskal and Mike Royko, Katherine Hepburn when she was in town, and visiting chefs James Beard and Julia Child, closed in 1979. Another retail store opened at LaSalle & Chicago, but like the State St. location, the building was sold and Burhop's reluctantly left the city.
Jeff & Jim had encouraged their father to expand the retail business, which they did, by opening stores in the suburbs.  After Vern’s retirement in the early 1980s, the old wholesale business was closed down, and some of the stores closed or changed ownership.  The two stores which remain are the Hinsdale store, still family owned, and Wilmette, owned by the family which owns Plaza del Lago. After over 30 years, we were forced to close the Glenview store, due to a problem with the new landlords. It was not a step we wanted to take, but they gave us no choice. We started a delivery service to keep in touch with many of our Glenview customers, and are surprised almost daily by former Glenview customers who drive down to Hinsdale to get their fish and wine.
Why is Burhop’s still around after all these years? “Honesty, and great service,” according to Jeff.  “We’ve always tried to have the best products for our customers.  We don’t pretend one kind of fish is another kind of fish, and when we advertise a sale price it’s for fillets.  Some retailers advertise a cheap price, but if you read the fine print, it’s whole fish. With certain fish, by the time it’s filleted you loose 60%  of the weight, so the whole price is no bargain.  Also, when we say our fish is fresh it is - not thawed out frozen fish in a fresh fish case.
“Our staff is trained to provide real service - we get to know a lot of our customers by name.  We can help customers
with recipes, cooking tips, party menus. We will specially portion, bone and skin the customer’s fish, and we usually do
it all with a good sense of humor.  If people want something special for a party, with a few days notice we can get
almost anything, as long as it’s in season.”
After all these years, our goal is still the same as it always was - provide the best fresh seafood, the most helpful and knowledgeable staff,  and the information and ingredients our customers need to have a successful seafood meal every
time they come in.